The Royal Pavilion, that onion domed and minareted masterpiece of Oriental style architecture exists today by the wishes of 36 Brighton voters. Queen Victoria offered it to the town for £50,000, having turned down a speculative builder's offer of £100,000, but the officers of the parish were divided about whether to accept. Stormy meetings were held and the matter dragged on and on until ultimately a poll of the townspeople was taken. The result was 1,343 in favour of purchase and 1,307 against.

This magic palace full of eastern promise started life modestly enough as Brighton House, a double fronted timber framed farmhouse in the Steine. The Prince leased it in 1786 when he had debts amounting to a quarter of a million pounds. He hoped that by tactfully withdrawing from the court and the capital either the King or Parliament would settle them. But after a few months of romantic poverty with Mrs Fitzherbert he realised that he wanted a house in Brighton that would be a jewel in the Imperial diadem, a fitting palace for the great prince he knew himself to be. In the end he got it - at a cost of £1 million over the next 35 years. Henry Holland was the first architect to interpret in stone his client's dream. James Wyatt expanded on this concept and Beau Nash provided the final touches to clothe a Sussex farmhouse in the exotic dress of far Cathay.

By 1821, when the work was completed, the Prince had become King. Perhaps it was ill health, or the realisation of his dream, that stopped him coming to Brighton except for occasional brief visits after that. Now, some 170 years on, the Royal Pavilion is visited by 400,000 people every year. The Prince must surely be pleased by such appreciation of his vision.

Was it a vision or a waking dream?
© John Keats 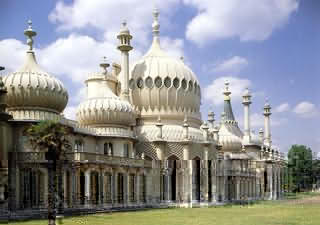