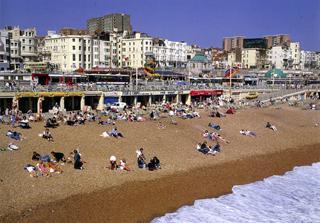 Since the first train steamed into Brighton's new station on September 21 1841 the town has been the first choice for Londoners wanting a day by the seaside. Of course, they used to come by stage coach before that but not in such numbers. Until Dr Richard Russell of Lewes published his treatise on the benefit to health of sea bathing, the men and women of this island race never thought of taking a dip for pleasure. The Channel was there to be fished or to be crossed to fight the French, not to swim in. Brighton made sea bathing its business in the 18th century and there was often a queue for the bathing machines lined up between the Old Ship Hotel and the bottom of West Street. They were presided over by the dippers, men and women who would spend their days up to their waists in water making sure that the belles and beaux of high society did not sink. Bathing attendant by royal appointment was Smoaker Miles who on one occasion stopped the Prince from having a swim as he considered the sea too rough. ‘I'm not going to let the king hang me for letting the Prince of Wales drown himself’ he said. Queen of the women dippers was Martha Gunn who lived to be 89 and is buried not far away in St Nicholas churchyard.

The days of a 60 minute run from Victoria in the Brighton Belle are over. Now it is a bumper to bumper crawl to the coast down the A23 on fine weekends - unless, of course, one comes by air and lands at nearby Shoreham or sails in to Brighton Marina. Brighton acts like a magnet to all who visit her.