The Victorians were not given to doing things by halves. When Sir Edmund Loder decided to take an interest in gardening he did not limit himself to an acre or two and a couple of greenhouses. In 1889 he bought Leonardslee at Lower Beeding, a garden originally begun in 1801, and set about planting this already well-wooded valley with the kinds of trees and shrubs which would give the best possible colour effects. It was all his own work: he did not employ a professional garden designer, and he developed his own hybrid rhododendrons -- plants which, with camellias, were his particular favourites. Sir Edmund also introduced the wallabies which have been used as environmentally-friendly mowing machines in parts of the valley for over a hundred years.

Today Leonardslee is one of the largest and most spectacular woodland gardens in the country and has one of the finest collections of mature rhododendrons, trees and shrubs. From the end of April until early June the rhododendrons and azaleas are at their most magnificent. The gardens, now covering more than 200 acres, are open every day from the beginning of April until the end of October - when the autumn leaves are dazzling. The present owner of Leonardslee is Sir Edmund's great grandson Robin, who has carried on the tradition of planting the finest that is available.

At the bottom of the valley is a series of lakes created by the early iron founders in their excavations for ore, and they are breathtakingly beautiful in early summer when all the colours of the flowering shrubs are reflected in the water. There is a fine bonsai exhibition in the courtyard, while the Rock Garden (at its best in early May) has a superb collection of evergreen azaleas and two large Chinese Lantern trees. 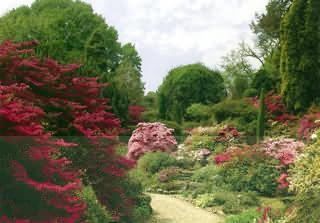