It was in the last phase of the development of the Royal Pavilion that the king's apartments were made. They are more sober, more restrained than the colourful chinoiserie of other parts of the palace for the man who would live in them was now nearly 60, overweight, suffering from gout and dropsy and oppressed by the cares of kingship. But the Chinese influence is still there - in the simulated bamboo of some of the chairs, the decorations on the black japanned writing desk, the Sevres vases on cabinets in the library which leads off from the bedroom.

Robert Jones, the designer of this suite of rooms, had chosen a design of dragons and clouds in white on a ground of bluish green for the walls. The paper used was probably hand painted although some blocks of the dragon and cloud design were made. Yellow curtains frame the recess which contains a carved mahogany bed panelled at head and foot in lilac silk and there is yellow on the doors, cornices, carvings and cushions. For the king's comfort the bed has bolsters of soft feathers, blankets of swansdown and a quilt of Marseilles lace. Also for his comfort, should she be needed at night, is a small staircase behind a concealed door leading to the apartment of Lady Conynham, the companion and friend of his later years. A similarly concealed door leads to his valet's quarters.

The king's apartments end, as the Pavilion and Brighton began, with sea bathing. A most elaborate marble and mahogany bathroom with five different baths in it was supplied with water pumped directly from the sea.

There's plenty of dippers and jokers,
And salt water rigs for your fun;
The King of them all is ‘Old Smoaker’,
The Queen of them ‘Old Martha Gunn’.
© Anon 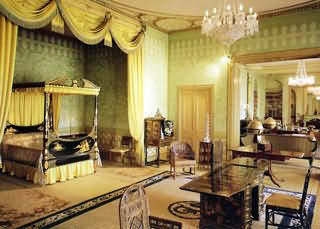