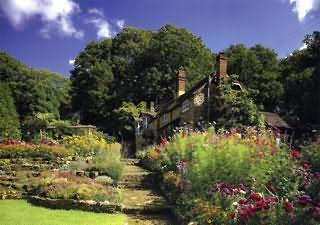 Fittleworth is a village with close connections with the art and music of Victorian and Edwardian England. The chocolate box prettiness it had in those days appealed to the painters of the period. The public for which they painted liked its pictures pretty and with a touch of sentimentality about them. First to set up his easel here was Vicat Coles. He rented a large house in the village called Brinkwells and held sketching classes for his friends. His social circle was a wide one and soon many artists were coming down by stage coach or post chaise for weekends in the country with him.

Even more arrived in the 1880s when Fittleworth station was opened and 18 trains a day on the Horsham to Pulborough line stopped at it. They were made welcome at the Swan, an old coaching inn run by Miss Jane Hawkins. She had a fondness for artists and not only persuaded them to patronise her house but also to paint in it. On the oak panels in the Picture Room of the inn are to this day paintings by John Varley, S G Burgess, Harold Cheesman, George Constable, Edward Knight, Edward Handley Reed, Augustus Weedon and other 19th and early 20th century artists. Also still on display is the inn sign painted by Robert Caton Woodville, noted for his scenes of conflict in the Boer War. Assisted by his son he produced a sign to hang from the centre of a wooden arch which spanned the village street. It showed a naked Leda, with a face remarkably like Queen Victoria's, sitting on the back of a swan. But propriety prevailed and the design was altered to show a well-draped faerie queen.

Modern Fittleworth still has its charming cottages, its tile hung houses, its beautiful gardens. The station has long since closed and the artists have gone, but a melody lingers. A group of chamber music by Edward Elgar bears the inscription ‘Brinkwells in 1918’ for the composer rented the house for a holiday and wrote some string quartets there which later he used as the theme for his ‘cello concerto.’

There is room in the smallest cottage for a happy loving pair.
© Schiller