Worthing should be seen from the sea. The modern town, which has a multi-storey car park on its promenade, looks at its best against the backdrop of the rolling Downs which protect it from the cold north winds in winter. It was the arrival of royalty that launched Worthing as a seaside resort, as it did Brighton. But whereas Brighton got the Prince of Wales, later to become George IV, and the glittering social scene that he created, Worthing got his ailing sister Amelia who liked a quiet life; her aged mother Queen Charlotte; her unfortunate sister-in-law Queen Caroline; and later Queen Adelaide.

The town's major expansion came with the railway. Soon its genial climate, level ground, good sands - when the tide is out - and the hinterland of the Downs attracted holidaying families from all parts of the country. They liked what they saw and many decided to settle. For the builders it was boom time and bungalows and villas, even Moorish mansions, sprang up from Lancing to the far reaches of Ferring. The retired moved into them in droves and postwar prosperity increased their numbers so much that the label Costa Geriatrica was unkindly applied to the area and the borough council began to do something about the age imbalance.

Today the borough of Worthing has a resident population of some 100,000 and does a brisk holiday trade as well. It has played host to the World Bowls in the park opposite Beach House where playwright Edward Knoblock used to live. But the house in which Oscar Wilde spent a three week holiday in September 1894 and wrote The Importance of Being Earnest has disappeared, as has the rest of the town's early architecture. There are shopping malls and pedestrian precincts where once there was a theatre, an assembly hall and two rival hotels, one run by a Mr Hogsflesh, the other by Mrs Bacon. But a Victorian lamp-post has been preserved and Grade II listed as of historic or architectural interest.

I grow old, I grow old
I shall wear the bottoms of my trousers rolled
Shall I part my hair behind? Do I care to eat a peach?
I shall wear white flannel trousers and walk upon the beach.
© T.S. Eliot 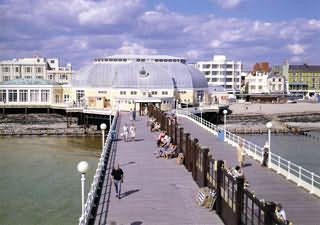