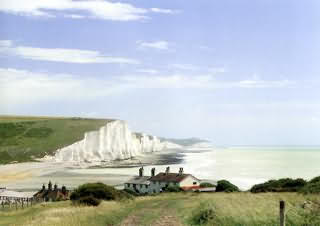 The chalk cliffs which stretch from Cuckmere Haven to Birling Gap are one of the few remaining lengths of undeveloped coastline in the continually developing South East of England. They are called the Seven Sisters simply because there are seven of them, named from west to east: Haven Brow, Short Brow, Rough Brow, Brass Point, Flagstaff Point, Baily's Brow and Went Hill Brow. Beneath the sea at their base are chalk ridges and gullies supporting a rich and varied marine life - shellfish of all kinds, sea anemones, snails, sponges and limpets. And swimming around are fish with strange names like Goldsinny and Ballan Wrasse.

The Seven Sisters have been designated a Heritage Coast, an Area of Outstanding Natural Beauty and a Site of Special Scientific Interest. A Voluntary Marine Conservation Area has been set up primarily to protect the marine environment but also to encourage education, research and recreation.

In 1971 the East Sussex County Council acquired the Seven Sisters Country Park - 692 acres of the Cuckmere Valley and its adjoining coastline and set about conserving its scenic beauty and giving people opportunities to explore and enjoy it. Wisely it banned all motor vehicles except from the car parks provided. It also arranged for only sheep to graze in order to maintain the grassland in the traditional manner. At Cuckmere Haven a shallow lake was made for resident and visiting wildfowl and an 18th century barn at Exceat Farm has been converted into an exhibition and information centre. The Seven Sisters seem to be in safe hands.

Clean of officious fence or hedge
Half wild and wholly tame
The wise turf cloaks the white cliff edge
As when the Romans came.
© Rudyard Kipling