The Long Man of Wilmington

Who is he - the giant man carved in outline through the turf into the chalk of the South Downs near the village of Wilmington? The 230ft high figure, said to be the largest representation of the human form in the world, has his arms outstretched and appears to be holding a staff in each hand. He was there before the Romans came - at least most historians agree that he was -- although they do not agree on much else concerning the Long Man.

It has been suggested, by Alfred Watkins in The Old Straight Track (Abacus 1974), that he is a prehistoric surveyor, aligning points to establish a ley line for early travellers to follow. Others argue that he is the Norse sun god Baldur in the act of opening the gates to let light and warmth into the earth. Or is he one of the giants of Biblical origin? There were giants in the earth in those days ‘when the sons of God came in unto the daughters of men, and they bore children to them, the same became mighty men that were of old, men of renown’. Was he perhaps a Roman soldier, a fertility symbol, a visitor from another planet or simply a figure carved on the hillside by the Benedictine monks of Wilmington Priory to indicate to pilgrims that bed and breakfast was at hand?

The Long Man is owned and maintained by the Sussex Archaeological Society.

I will go out against the sun
Where the rolled scarp retires
And the Long Man of Wilmington
Looks naked towards the shires.
© Rudyard Kipling 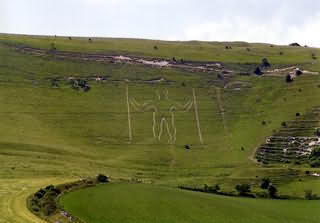