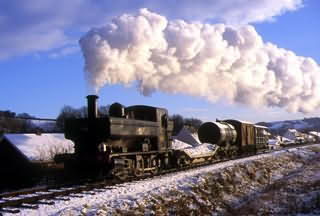 If you have seen the screen version of "Harry Potter", you will remember the steam train which took Harry Potter to the School of Magic. And if you thought that today you could only find steam trains in films and books, you were very much mistaken. Everybody knows that British people care a lot about their traditions and history. The same is true for steam trains. In Wales alone there are seven working steam railways. Scotland is also proud of some beautiful railways. As for the most famous steam railway in the UK, it is undoubtfully in England - the Bluebell Railway. Long or short, with many trains or just a few, steam railways attract people from all over the country.

The Gwili Railway is one of the smallest surviving steam railways in the UK and is situated in West Wales. It was built in the late 19th century to connect Carmarthen and Aberystwyth, the two major towns in the area and was originally 8 miles long. In the 19th century the railway mostly catered for the local farmers. During the first and second World Wars it was used to carry timber, farm produce and military uniforms. It was closed to passengers in the 1960's and stopped working altogether in 1973. It was re-opened in 1978 to become one of the many working railway museums in Britain. The main reason for preserving the track was its impressive location. The Gwili railway goes through the dramatic Gwili valley. Surrounded by green mountains, the track runs side by side with the fast river Gwili turning and twisting like a beautiful streamer. 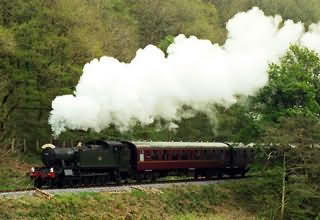 Today the line is only 2.25 miles long and starts from Bronwydd Arms station near Camarthen. The adventure starts as soon as you get on the platform. In the Ticket Office, a friendly booking clerk will sell you a ticket which looks exactly like railway tickets used about 100 years ago and explain the route. He will also gladly answer any of your questions about the railway. While waiting for the train to arrive you can have a look at a real 19th century Signal Box and the signalman will be very happy to explain to you what all the levers do. When the train comes, you can sit where you like except…for the first class coach! Museum or not, you can only sit according to your ticket. This may be in the Buffet / Bar coach, a compartment coach or, on certain days, the Vintage Taff Vale Railway coach built in 1891. It is also important to add that all the staff on the railway wear early 20th century period costumes to make your experience more authentic.

During the journey you can lean out of the window to see the engine and when the track curves, the engine drivers busy putting coal into the engine to keep the train going. But before you can do that, you have to get your ticket checked by the ticket conductor! There train stops twice each way and at Llwyfan Cerrig ("Stone platform") the youngest passengers can have a ride on the Miniature Railway.

Although the passengers have to pay for their tickets, maintaining old railways and trains cannot be cheap, so who pays all those people who do the work? Well, you may be surprised but all the people who work on the steam railways in Britain are volunteers, which means that not only they do not get paid but some of them actually pay some money themselves in order to spend all their weekends and free time selling tickets, fixing the engine and doing any other work required. You can probably guess that most people who work on the steam railways are men. Everybody knows that British men have a reputation for preferring to potter in the garden, watch TV and read a newspaper to any other activities in the world. So why do they give up their free time to do hard work? Well, one of the reasons is that riding a steam train is extremely enjoyable. There is something irresistible about the hoot of a steam engine and the atmosphere it creates. For many, it is a good opportunity to meet new people and make new friends. It is also important to remember that volunteer work for the local community is in the British character. British people get enormous satisfaction from doing something useful and pleasant for other people in their free time. And the last reason, but certainly not the least, is that men never grow up. How many times have you seen your father buy you a toy and then spend hours "showing" you how to use it? Well, it is the same with steam engines. And I am sure you will agree that running a REAL steam train is a lot more fun than playing with your son's toy railway!