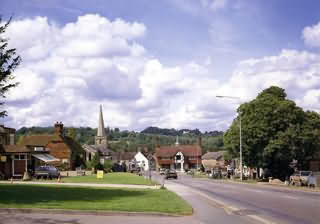 As the name indicates, this village is on the edge of a forest - the 14,000 acre Ashdown Forest - where it is quite possible to see the wood for the trees as they are interspersed with areas of heathland and rocks. In 1987 the forest was bought by East Sussex County Council for one million pounds plus from Lord de la Warr whose family had been Lords of the Manor of Ashdown since the reign of James I. The affairs of the forest are administered by a Board of Conservators from two oak-framed barns of the Ashdown Forest Centre. The third barn is an exhibition and information centre, well patronised by the hundreds of picnickers, walkers, and people on horseback who frequent the forest on fine weekends. They obviously disagree with Cobbett who in his Rural Rides described it as: ‘A heath with here and there a few birch scrubs on it. Verily the most villainously ugly spot I ever saw in England’.

Forest Row is a main road village on the northern apex of the forest. Here the sporting peers of yesterday had their hunting lodges, to which they would return after a day in the forest in pursuit of deer, wild boar and, at one time, wolves. One of its oldest surviving buildings is the Swan for which, in 1750, a widow woman Mary Martin, paid a hen a year in rent to the Lord of the Manor for the tenancy. Holy Trinity church with its tall shingled spire was built in 1836 and opposite it is a large hall. This was a gift to the village in 1892 from Mr H R Freshfield of Kidbrooke Park in memory of his son. It still wears its original pennon weathervane incised with the letter F.

A forest is long in growing, but in a moment may be
reduced to ashes.
© Lucius Seneca
← back forward →
хостинг для сайтов © Langust Agency 1999-2020, ссылка на сайт обязательна