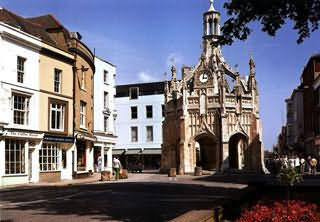 Chichester's Gothic market cross was a gift to the city from Bishop Edward Story (1478-1503) to provide shelter for the poor who brought their produce to sell beneath it. It is built, like much of the cathedral, of Caen stone and is a mass of arches, buttresses, pinnacles and other adornments. Until the Civil War, when they were destroyed by the Parliamentarians, there were a number of statues in niches beneath the present belfry which dates from 1724. The four clock dials were installed in 1746.

Like most cathedral cities Chichester has plenty of precincts, cloisters, gardens and closes. A few steps away from its busy four main streets, now pedestrianised, are quiet rows of Georgian fronted houses. Even the car parks are havens of tranquillity, surrounded as they are by trees, shrubs and borders of flowers.

It has changed successfully with the times but has not totally obliterated its past. The dice used in a Roman gaming room are now on show in the Dolphin and Anchor which was once two coaching inns - the Whig Dolphin and Tory Anchor; the licensee of the Royal Arms still brews a milk punch from a hundred year old recipe; and the room in Eord Lumley's Scarborough House where Elizabeth I held audiences has been carefully preserved in all its baroque splendour.

The 277ft high spire of the cathedral towers above the city and the flat plain on which it is built. Its grace and its simplicity are echoed in the verses of Chichester's greatest poet, William Collins.