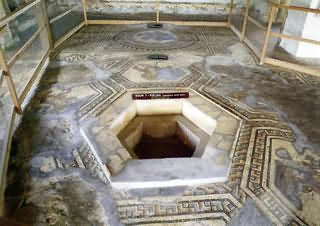 In 1811 tenant farmer George Tupper was ploughing a field called the Berry on Lord Newburgh's estate at Bignor when he turned up a mosaic pavement. That was the start of the excavation of a large Roman villa that was probably the home of a Colonial Governor around AD 400. The first mosaic to be uncovered was in what is now known as the Ganymede Room. Its decorated area is in two circular sections, one 7ft 6ins in diameter and the other 16ft. In the smaller circle Ganymede, most beautiful of mortals, is pictured being carried off by an eagle to Olympus to become cup bearer to Zeus. The larger circle contains six smaller designs showing figures of dancing nymphs in the centre of which is an hexagonal stone cistern four ft in diameter and 1ft Sins deep. At the bottom of it is a three inch diameter lead pipe which runs off in a southerly direction. The path of the pipes of this room's central heating system can still be traced.

The Bignor villa has been excavated a number of times since its discovery in the early 19th century. Its lovely mosaics are protected from the weather by friendly little thatched huts and the site is still part of the surrounding farmland. Latest thinking is that the villa floored with the mosaics was the administrative centre of a 2,000 acre estate but ample evidence has been uncovered of an earlier timber framed structure on the site dating from around AD 200.

When I was young and wanted to see the sights,
They told me 'Cast an eye over the Roman camp
If you care to.'
© Christopher Isherwood
← back forward →
хостинг для сайтов © Langust Agency 1999-2020, ссылка на сайт обязательна