The River Rother at Rye 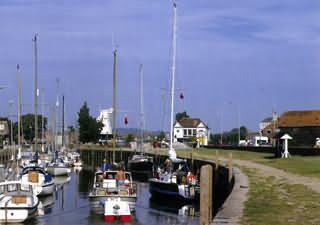 Boats coming in from the sea can sail right into Rye on the tide and the river Tillingham and on fine weekends in the summer there are French, Dutch and other foreign flags among the Red Ensigns of these water-borne visitors. In earlier days the Strand Quay was the commercial centre of the port of Rye and cargoes would be loaded and unloaded here. As the sea has receded over the years the tidal channels of the river Rother have to be navigated for a mile or so by craft coming in from the sea at Rye Harbour. The Rother itself goes to the east of the town and through green fields occupied by sheep, cows and a line of electricity pylons to Newenden and on to Bodiam. In so doing it forms part of the boundary between Kent and Sussex.

Rye's most famous family, the Jeaks, knew the river well. The first Samuel Jeaks, born in 1623, was the author of Charters of the Cinque Ports; the second Samuel was, at 19, said to be knowledgeable about astronomy, navigation and geometry as well as Latin, French and Greek; and the third Samuel built a flying machine which nearly caused his death. Another famous Ryer, as the inhabitants are called, was John Fletcher who collaborated with Thomas Beaumont in writing The Knight of the Burning Pestle and other Jacobean tragedies. Queen Elizabeth I came here in 1573 and was so pleased with her reception that she said the town could be known as Rye Royal.

When the sea was calm, all boats alike
Showed mastership in floating.
© William Shakespeare