A story of Mad Jack Fuller and his follies 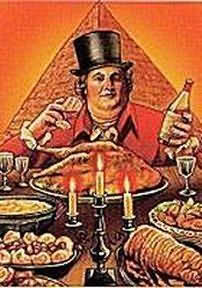 Welcome to Brightling, a small picturesque farming village built around 1066. It is situated in East Sussex, one of the prettiest southern counties in England. For miles around, Brightling is surrounded by lovely hills and glorious countryside. The locals say that once upon a time, there lived a bad rich man who really liked playing tricks on people. One day he decided to… but wait a minute, don't think that you are just going to read another folk story here because this story REALLY happened!

Many, many years ago (in 1757, to be precise) the most famous resident of Brightling, John Fuller was born into a wealthy family of iron-makers and politicians. When John grew up he also became a politician and even served 4 terms as a Member of Parliament. His family made its money through making cannons for the Royal Navy and through ownership of large sugar plantations worked by the then acceptable slave labour. John did not see anything wrong in being a slave-owner, which was why he had to leave the Houses of Parliament, after a debate with the Speaker of the House over the ban on slavery in 1810. In spite of that bad side, John Fuller was a true philanthropist who founded many cultural projects, such as paying for a new organ for Brightling church and restoration of a nearby castle.

However, it was not one of the aforementioned good or bad qualities of John Fuller that secured his name in history. It was his famous ECCENTRICITY and his FOLLIES. John did many strange and unexpected things and for which the locals called him Mad Jack. A folly is an architectural construction which is not what is seems to be. There are a number of follies in England but Mad Jack's follies are truly remarkable. 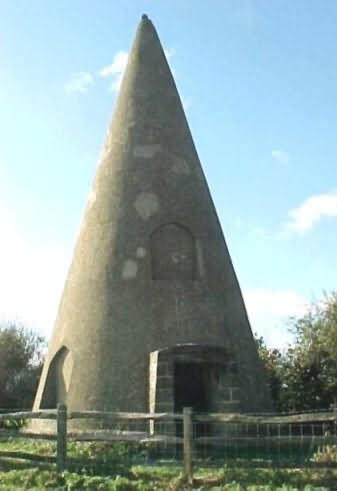 One day, Mad Jack was having dinner with Vicar of Darlington. During the conversation (and after a few drinks) Jack boasted to the vicar that he could see the spire of Darlington church from his bedroom window. When Jack woke up the next morning and recollected the bet. When he looked out of the window, he realised that he had lost, as the thing he could see was a large hill. Mad Jack was not the kind of person to get discouraged by such a little thing, so he ordered to build the "Sugar Loaf", a building which looked like the spire of Darlington church just behind the top of the hill. It was called the Sugar Loaf because of its shape, which was similar to the shape in which sugar was delivered to local shops. Nowadays, it looks like a forty-foot-high cone with an entrance and a window. Then Jack invited the Vicar of Darlington to dinner. Well, as you can guess, the vicar looked out of the window, saw "the spire of Darlington church" and Mad Jack won the bet!

The Sugar Loaf was not the only folly built by Jack Fuller. When Jack grew old, he asked for permission to build a 20 foot high pyramid-shaped tomb in the church graveyard. For the privilege, Jack built a new pub one and a half miles away from the church to replace the old pub, which was inconveniently right opposite the church. For many years people believed that he was buried in that pyramid sitting upright in his favourite chair, wearing a top hat and holding a bottle of port and a glass! Unfortunately when it was opened in the 1980s for repair, the vault was empty. Instead, Mad Jack was buried beneath the floor. On the wall there was an inscription:

The boast of heraldry, the pomp of power,
And all that beauty, all that wealth they gave,
Await alike the inevitable hour.
The paths of glory lead but to the grave.

Eccentricity is part of national British character. True eccentrics are loved and cherished in Britain. So much so, that some quite ordinary people try to look or behave in an eccentric way, so there is no surprise that more than two hundred years later the story of Mad Jack is still so popular. What do you think about Mad Jack? Do you think that he was really mad or just eccentric?