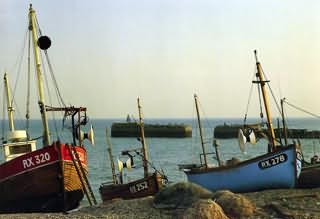 Until the great storm of 1287, which also washed Old Winchelsea away, the fishermen of Hastings had a harbour. Since then they have beached their boats by the tall wooden net houses in Rock a Nore. In the 1850s a total of 85 fishing boats, varying in length from under 18ft to more than 34ft, were registered in the port of Hastings. Now there are between 20 and 30 who bear the RX registration letters. The design of the net houses which are such a feature of the Stade dates back to the days of Elizabeth I. They are three storeys high and eight ft square, and the upper floors are reached by internal ladders. They were used for drying the 40 yard long mackerel nets and the 30 yard long nets used for herring fishing. Modern nylon nets almost dry themselves so the houses today are picturesque rather than practical. Nets can still be lost at sea. On February 1st 1846 one boat had such a large catch of mackerel that its nets sank and even in recent years and with modern tackle disasters can happen.

What life was like for the local fishermen in the days before diesel can be seen in the Fishermen's Museum, which is housed in a former chapel next to the net houses. On display there is a Hastings sailing lugger, Enterprise, built in 1909. Her heavy counter stern helps her ride the waves bow on to the beach. There are also plenty of photographs of white whiskered fishermen and even a stuffed albatross. The Shipwreck Heritage Centre nearby is devoted to disasters at sea and contains treasure salvaged from wrecks around the coast, including the Amsterdam. This Dutch East Indiaman came ashore at St Leonards on a January afternoon in 1748 with all guns firing. She had broken her rudder off Pevensey and the gunfire was to warn people ashore of her plight. The value of her cargo was estimated at £200,000 and, in spite of the enthusiastic efforts of looters and wreckers nearly all her 28 chests of silver were brought ashore.

I must go down to the seas again, for the
call of the running tide,
Is a wild call and a clear call that may
not be denied.
© John Masefield
← back forward →
хостинг для сайтов © Langust Agency 1999-2020, ссылка на сайт обязательна