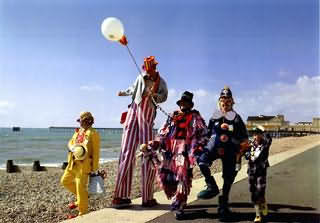 Bognor is friendly, compact, cheerful. It has a sandy beach and goes in for guest houses rather than huge hotels. To further its family holiday image, it once brought on the clowns! It was in April 1985 that the first Clowns Convention came to this seaside resort and the resulting festival of fun was voted a huge success. Arun District Council was only too happy to repeat the experiment and the Convention became an annual event, attracting clowns from all parts of the world to a Big Top which seated 1,500 spectators.

Sir Richard Hotham, the London hatter who decided in 1787 to build Bognor as a rival to Brighton, probably would not have liked it at all. He wanted to attract the rich, the famous and better still, the royals, to his new town which he threatened to call Hothampton. He did entice Princess Charlotte down for a holiday but her father, then Prince Regent, remained firmly in Brighton.

Bognor became Bognor Regis when King George V was brought to Craigweil by ambulance on February 9th, 1928 to convalesce after a serious illness. For four months Craigweil was a royal residence and Queen Mary would often be seen shopping for antiques in the neighbourhood or visiting Bognor bookshops to buy thrillers for the king. Other members of the royal family came to stay, among them three year old Princess Elizabeth, King George's favourite grandchild, and the dashing young Prince of Wales who flew to Bognor by private plane. How Sir Richard Hotham would have loved it.

The world would be nicer than ever
We thought that it possibly could.
© Elizabeth Wordsworth
← back forward →
хостинг для сайтов © Langust Agency 1999-2020, ссылка на сайт обязательна