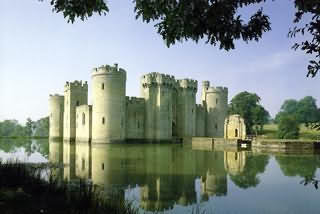 Bodiam must be everyone's idea of the perfect castle - a moated, romantic fairy-tale vision in stone. It was built in 1385 by Sir Edward Dalyngrygge to guard an important crossing of the river Rother from the French raiders who had wreaked such havoc at Rye and Winchelsea. The castle, which has suites of rooms round a central courtyard for its lord, his guests, his servants and his garrison, was never actually attacked but it came close to it during the Wars of the Roses and in the Civil War when it was made undefendable by the forces of Oliver Cromwell.

The development of the cannon and the impossibility of any defence against bombardment by it made castles like Bodiam obsolete. The stronghold that Sir Edward received a licence to crenellate on October 27th 1385 was allowed to fall into decay. Its stone was pilfered to build cottages in its shadow, and even one in its courtyard, and it would have disappeared for good had not Mad Jack Fuller, squire of Brightling and noted Sussex eccentric bought it in 1829 just as it was about to be demolished.

Bodiam was lovingly restored to its full glory by Lord Curzon of Kedleston who bought it in 1916 and bequeathed it to the National Trust when he died in 1925.

The splendour falls on castle walls
And snowy summits old in story:
The long light shakes across the lakes,
And the wild cataract leaps in glory.
© Alfred, Lord Tennyson Теннисона