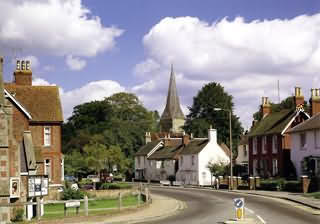 In the days when every parish church was packed on Sundays there was often competition for the best seats. At Billingshurst they even went so far as to have a pew race. A feud between two families had grown up over who should have the chancel seats and this divided the village. Every Sunday there would be an unseemly scramble by the rival families and their supporters for the prime positions. But at least it did not end in a duel as a similar pew feud did at Littlehampton in 1796.

Billingshurst's heyday was in the far past. It was an important station between Londinium and Regnum and the legions travelling along Stane Street would pause here for rest and refreshment - and no doubt some entertainment too. Even the name has a Roman origin, so it is said, being called after Belinus, an engineer who had to cut the way through the woods for Stane Street to be built. He is also credited with Billingsgate, through which the road entered London.

In the 18th century, according to Cobbett in his Rural Rides, Billingshurst was ‘a very pretty village’ and he had ‘a very nice breakfast in a very neat little parlour of a very decent public house’. In the last few years Sotheby's in Sussex have moved their salerooms from Pulborough to Summers Place on the outskirts of the village and now, on sale and view days, the population is swollen by collectors and dealers from all over the world.

How often have I paused on every charm
The sheltered cot, the cultivated farm,
The never failing brook, the busy mill
The decent church that topt the neighbouring hill.
© Oliver Goldsmith
← back forward →